This could be a sneaky clever update for Facebook, as it looks to win back young users, and slow the rising momentum of TikTok as the social app of choice for the next generation.

Today, Facebook has announced a new ‘Creative App Platform’ for Facebook Stories, which will enable developers to create and promote Stories-related apps direct within the Stories eco-system.

As you can see here, through Facebook’s new platform, app developers participating in the program will be able to get their tools listed within the Stories composer flow, which will enable users to access more creative apps for their Stories, without having to go find them off-platform.

“We worked to understand how Sharing to Stories could further support the unique needs of our creative app partners. We found that app discovery is a key issue – in a competitive and rapidly expanding market, it is expensive and difficult for our partners to reach the people that continue to find joy from their apps. In response, we’ve built the Creative App Platform – a new concept that allows people to discover creative apps directly in Facebook Stories.”

The concept is a lot like Snapchat’s ‘Minis’ offering, which enables developers to share micro-versions of their full apps within Snapchat.

That expands on the creative potential of Snaps, by providing even more tools and add-on options that you can share, via your private Snaps, Stories, etc.

Facebook’s variation is focused on Stories specifically, and creative add-ons, as the name would suggest, with various developers signing up for the first phase.

“In addition to partners that include media editing app B612 and performative music creation app Smule, we’re thrilled to partner with VivaVideo and Vita, all of which provide uniquely rich and robust experiences for story creators. We’re also thrilled to be adding new partners to the platform soon – these will include Picsart, one of the world’s best creative platforms, Camera360 and Sweet Selfie.”

The most significant advantage for Facebook here is expanded creativity, one of its key weak points at present, with the vast majority of its Stories features, along with tools for Instagram Reels, being replicas of options already available on TikTok and Snapchat, which leaves it constantly playing catch-up.

Even today, Instagram announced two new features for Instagram Reels, in text-to-speech translation and voice changing filters, both of which have been available on TikTok for literally years.

If Facebook, and Meta more broadly, is truly serious about winning back younger audiences, it’ll take more than a few trend-jacking tweets and sponsored videos from TikTok influencers – the company will need to commit to finding the next big things, the next big tools and options that will catch on with audiences, and make Instagram and Facebook the apps that people need to come to for the latest trends and features.

Meta should be able to do this. It has far more resources at its disposal than any of its rivals, while it also has a much larger cumulative audience, which should be a valuable lure to potential partners. No doubt many apps will be keen to tap into the reach of Facebook Stories to promote their tools – and if Facebook’s able to stumble across the next big trending function or tool as a result, and build that directly into Stories, without much effort on its part, that could be a major win for the platform’s youth push.

Which is why this new platform is likely of more value to Facebook than Minis are to Snap. Snapchat’s audience is much smaller, and more specific, demographic-wise, which will likely mean that Facebook’s ‘Creative App Platform’ will garner more interest – and if Facebook then looks to promote these new functions to more users, in order to boost Stories usage, the potential for its partner apps is significant.

It’s only the early stages, with the platform currently in limited beta, but Facebook has put out the call for potential partners to join up, with a view to the next stage.

It may not seem like much now, but this could end up being a significant update for Meta’s efforts. 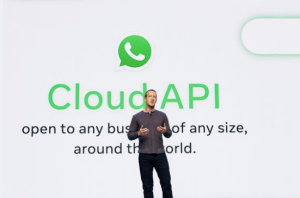