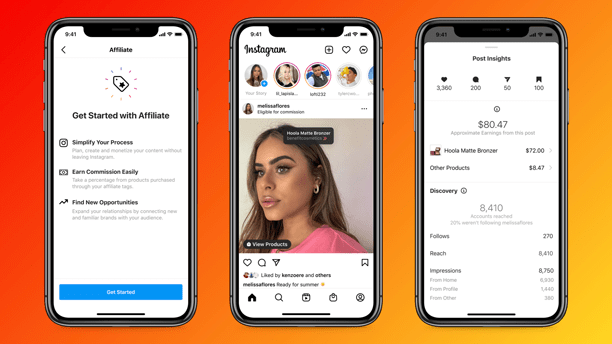 Will social commerce ever catch on in western nations, and become the big money maker that it has in some Asian markets?

It’s a key question, particularly for TikTok, which isn’t able to directly monetize content through in-stream ads like other video apps. On the Chinese version of TikTok (Douyin), in-stream commerce has become its biggest income stream, with live commerce, in particular, generating big dollars for the app and its creative talent.

But thus far, users in the US and Europe haven’t shown much interest in buying on social apps, so much so that Meta has now opted to shut down its live commerce initiative on Facebook, as well as its affiliate product tagging option on Instagram.

Originally launched in June last year, Instagram’s native affiliate program currently enables eligible creators to discover new products that are available for purchase in the app, then share those products with their followers, via dedicated shopping tags. Creators then earn a commission for any subsequent purchases that they’re able to drive from their content.

It seems like a good supplementary income stream for IG creators – but again, like all in-stream shopping options, it hasn’t really caught on as Meta would have hoped.

As reported by Digiday:

“The program [has] struggled to gain adoption among creators, according to the creator industry executives. Specifically, the program involved too many steps for creators to get set up, and once a creator participated in the program, they were no longer able to tag products that were not included in the program in posts on Instagram.”

So it’s not as directly attributable as in-stream shopping, in general, not catching on, as there are other complications noted here. But you can bet that if Instagram was making money from it, it wouldn’t be shutting it down, which goes the same for live shopping on Facebook (live shopping on Instagram, however, will continue to be developed).

Which is bad for Meta, and its own commerce ambitions, which it had hoped would enable it to build on the pandemic-led eCommerce boom and establish both Facebook and Instagram as more all-encompassing discovery, recommendation and shopping platforms, in addition to their social and entertainment elements.

“Many companies assumed that the swells and business they saw when the pandemic hit were an acceleration of existing trends that would have staying power. In practice it seems like almost all these trends reverted to pre-pandemic trend-lines.”

But again, this is even worse for TikTok, which is largely reliant on in-stream commerce becoming a thing in order to truly maximize its revenue potential, while also keeping its top talent aligned to the app.

TikTok too has had to scale back its eCommerce plans, with its initial push into live commerce seeing poor response in Europe, forcing it to delay its expanded rollout plans. That’s a big blow – because at the same time, more and more TikTok creators are sounding the alarm about the low payments that they’re increasingly seeing from the platform’s Creator Fund, its key, direct monetization pathway, which is subsequently seeing more and more of them spend more time creating for YouTube and IG instead, where they can make real money, without having to organize their own third-party affiliate deals.

That, eventually, could become a bigger threat to TikTok’s current dominance, while others have also noted that the app isn’t really designed to help creators build an audience, as such, as the broader content focus is more about uncovering the latest, trending posts, from anybody, as opposed to driving users to follow specific creators and accounts.

In-stream commerce is supposed to be the big thing that enables its top stars to make money directly from the app. But if users aren’t interested, and creators aren’t taking it up, as many Chinese stars have, that could be the start of a downward trend for the app, as more of them then spend their time building their audiences elsewhere.

It’s not a problem as yet. TikTok is still growing, and its addictive ‘For You’ feed continues to lure more users back to the app more often.

But what if its top stars begin posting exclusively to YouTube, and YouTube Shorts instead? What if YouTube offers them exclusive contracts, pulling their content out of the app – what if TikTok is no longer to hive of the latest, greatest trending content anymore, because people can make more money elsewhere?

It seems unlikely that TikTok’s going to lose enough momentum for that to be a real issue, with projections that it’ll soon hit 1.5 billion active users. But it does feel like an inflection point is coming, where TikTok will either need to provide another revenue pathway for its stars, or it’s usage will start to plateau, then decline slowly over time.

Maybe we’re too addicted to short-form video now for that to happen. But if the next viral, short-form trend originates from Instagram or YouTube, I’d be taking note.

It’s not going to be a sudden decline, but like Vine before it, if TikTok fails to take care of its top talent, they will start looking elsewhere.