Given the current volatility in crypto markets, which have been intrinsically connected to the current NFT trend, it seems like a strange time for Meta to be making a bigger push on NFTs, and its various NFT projects across its apps.

But that’s what it’s doing, with Meta CEO Mark Zuckerberg announcing coming digital payment options, and Meta previewing new NFT features, along with a new guide as to how NFTs work to help people get into the market.

First off, on payments – as part of a broader confirmation of the re-naming of ‘Facebook Pay’ to ‘Meta Pay’ instead, Zuckerberg has also announced that Meta’s working on a new ‘wallet for the metaverse’ which will provide a more integrated way to securely manage your digital identity and purchases.

As explained by Zuckerberg:

“In the future there will be all sorts of digital items you might want to create or buy – digital clothing, art, videos, music, experiences, virtual events, and more. Proof of ownership will be important, especially if you want to take some of these items with you across different services. Ideally, you should be able to sign into any metaverse experience and everything you’ve bought should be right there. There’s a long way to get there, but this kind of interoperability will deliver much better experiences for people and larger opportunities for creators.”

This is Meta’s big, long-term vision, that users will be able to hold ownership of digital items beyond a singular app or space – so if you buy an outfit for your character in Fortnite, you’d be able to wear that same outfit on your Facebook Avatar in a business meeting, theoretically.

There’s a long way to go in making this a reality, as Zuckerberg notes, but Meta has also recently signed up to a new ‘Metaverse Standards Forum’ to establish interoperability standards for the metaverse space, while this new wallet would also look to connect with other apps and tools, beyond Meta’s apps, to facilitate such connection.

It’ll take time, and many agreements to enable such. But this is another indicator of where Meta is headed, and the opportunities of the next digital connection space.

Which is also where NFTs, theoretically, come in, and after launching an initial test of NFT display options on Instagram last month, Meta is now looking to expand that to more creators ‘in a handful of additional countries’, as it seeks to establish another means to facilitate digital connection.

“Creators and collectors will be able to share their digital collectibles across Facebook and Instagram after we begin rolling out the feature on Facebook with select US creators at a later date. We’ll also soon start to test NFTs in Instagram Stories with SparkAR.”

Instagram NFTs are already viewable in AR, and the integration into Stories will provide another, advanced means of showcasing digital artworks in the app, which could help to spark more interest in the broader NFT trend.

Though as noted, that interest is waning, with search traffic for NFTs declining over time.

And as more collectors get burned by rug pulls and the ongoing crypto market crash, it seems that the NFT fad will taper off significantly – but the broader view, as Meta notes, is that digital items will see greater focus as we advance towards the next stage, maybe not as profile pictures of bored apes, as such, but as variable digital objects, which could be traded and displayed via the same means as current NFTs.

Which has merit. I personally don’t think that anyone will be impressed by your crappy JPEGs of badly drawn characters in future, but I do see that the capacity to purchase digital items, and retain ownership of such across spaces, will be of significant value at some stage.

That’s why it’s worth learning about NFTs, and understanding the underlying processes, which Meta is also looking to facilitate with its new NFT overview. 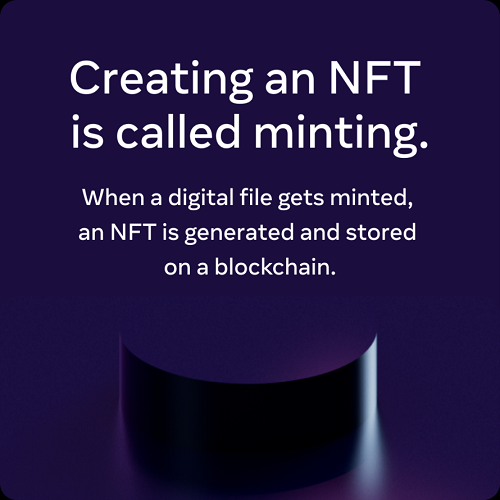 It’s a basic explainer of the core principles of NFTs – which, in some ways, are getting a bad name because of all the NFT bros and the misguided attention on scammy ‘art’ projects in this initial phase.

And then, again, there’s the market collapse, which makes this an odd push – but maybe now is the right time to learn, before NFTs become something else entirely different within the metaverse space.

Logically, Meta’s new NFT announcements were originally timed to coincide with the large-scale NFT NYC event happening this week, which has seen large groups of middle-aged men trudging their way through the city streets, and taking Instagram videos of digital artworks plastered across buildings.

Despite many proclamations, that’s not the future of digital connection, but the underlying process of NFT trading may well be a key aspect, which is why these new announcements from Meta are important, even in the current bear cycle for the crypto space.