YouTube has published a handy new overview of how its recommendation system works, in order to help creators build an audience on the platform, and reach more viewers with their clips.

The overview is presented by Rachel Alves, a product manager for discovery at YouTube. Alves has shared various insights into how the platform’s recommendation systems work, and she notes that this presentation, in particular, is usually used at conferences and the like to help people understand the systems that influence how videos are distributed.

As noted by Alves:

“You don’t need to be an expert in algorithms of analytics to be successful on YouTube.”

Alves begins with an overview of the core aims of YouTube’s recommendation systems.

The key aim, as noted here, is to keep users coming back, by ensuring that they have a good experience on the platform.

“So we really maximize long-term satisfaction, so viewers keep coming back to YouTube.”

That, of course, is what you would expect, by Alves does note that YouTube has changed what it optimizes for over time.

“If we go back to 2011, what we optimized for was clicks and views […] but that’s not that great of a metric, because it may indirectly incentivize clickbait-y or sensational titles or thumbnails that get people in to watch a video, but doesn’t make them very satisfied or happy.” 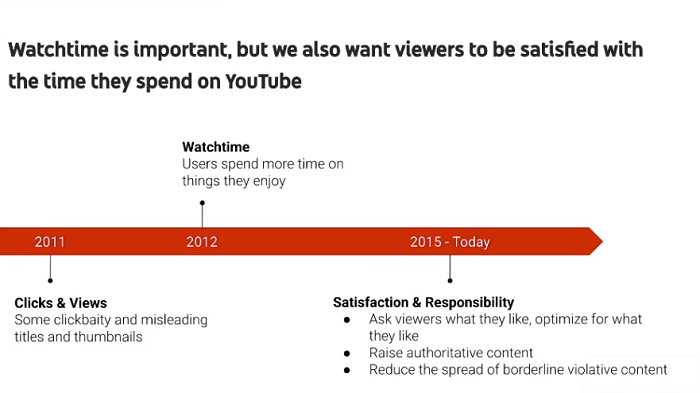 Alves says that a lot of the feedback that YouTube got in the early days of its algorithmically-defined feed was that people’s home feeds were being filled with “sensational or off-putting videos”, so it switched focus to watch time as a key metric instead in 2012.

“How much time somebody spends watching a video or channel is much more indicative of the quality of the content, because if you spend more time watching something, it’s more likely that you’re going to be interested in it.”

However, Alves says that watch time isn’t a perfect metric either, because while you may spend more time watching something, that doesn’t necessarily mean that you’ll end up feeling good about that time spent afterwards.

Because of this, YouTube has since been seeking to better define “quality or value” watch time, optimizing more towards user satisfaction.

So the focus is both on user satisfaction, and ensuring that people feel good about their experience on the platform, while also maintaining responsibility over what gets amplified through its recommendations.

YouTube has, of course, faced various challenges on this front, with the platform regularly coming under scrutiny for amplifying controversial content, including misinformation, conspiracy theories and politically divisive material. There’s no perfect solution for such, but YouTube’s seeking to keep these considerations in mind as it goes about refining its approach to what videos it recommends to users.

In terms of surveys, as noted, YouTube sends out millions of surveys to viewers every month, gathering feedback on a wide range of video uploads. 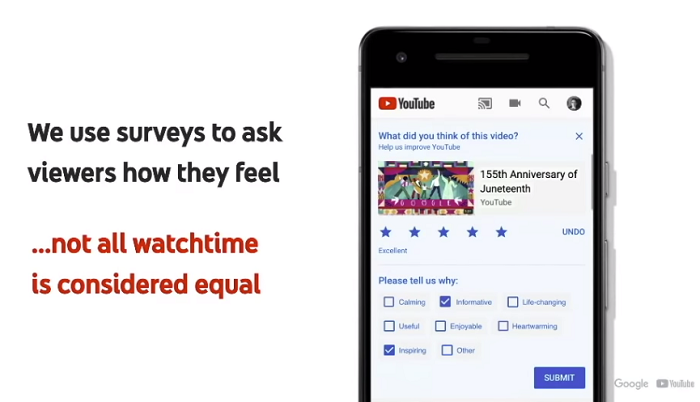 Alves says that they don’t share this information with creators at the moment, because they often don’t have enough feedback on each individual clip to provide useful feedback, but they can use the info to better inform their algorithms and systems.

“We are looking at adding more satisfaction data, and externalizing it to creators, so it is something we’re working on.”

And yes – as you may probably expect, in addition to direct feedback via survey prompts, YouTube also uses signals like: 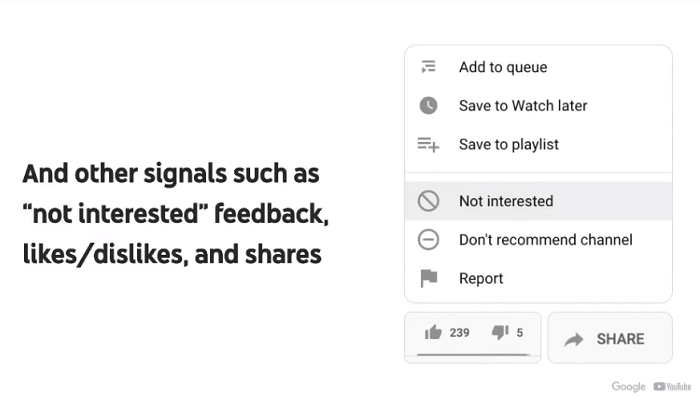 Like other social platforms, these actions are important in defining video reach through YouTube’s recommendation surfaces (i.e. the Home page and ‘Suggested’ listings). As much as YouTube does want to lean on more in-depth user feedback to determine whether a video provides viewers with a good experience, these lesser, more immediate response metrics do also play a part in determining your performance.

Alves also notes that the Home page and ‘Suggested’ listings actually use different algorithms – so the idea that there’s one central YouTube algorithm is not correct.

“The Home page offers up a broad array of videos when you visit youtube.com, and it uses similar signals as ‘Suggested’, but they are designed to do slightly different things.”

Given this, Alves notes that creators often want to know how they can optimize for each element – to which Alves says ‘you can’t’.

With this in mind, Alves says that creators looking to maximize views from the home page should try to consider their content from the perspective of somebody who’s been recommended their content, due to their interest in similar clips, but may not yet be familiar with their specific channel.

A reference to an in-joke with your audience may work in ‘Suggested’, as these are more aligned to each specific video clip, but in the home feed, you want to consider more general appeal, and what will make newer viewers, with a related interest, click. 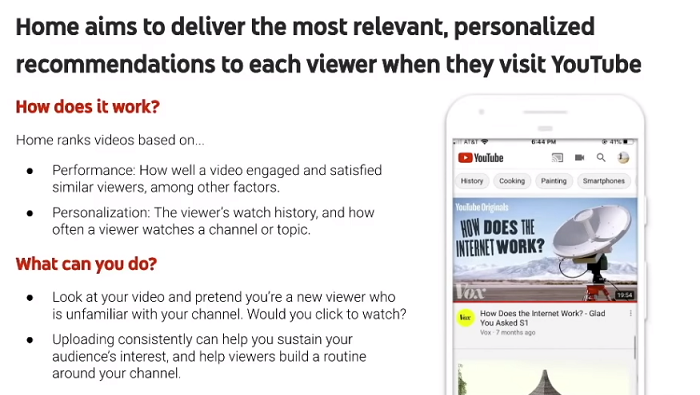 As you can see here, Alves also notes that posting consistently can help to keep your videos coming up in relevant user home feeds, alerting them to your latest if they’ve already watched some of your other clips.

In the ‘Suggested’ feed, Alves says that these highlighted clips are designed to guide viewers on what to watch next after the video they’re currently watching. 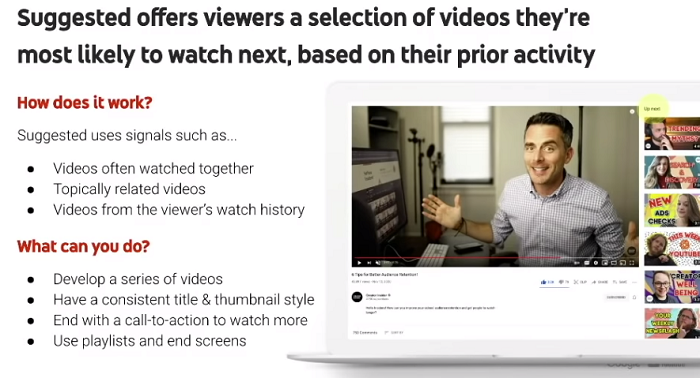 That means the suggested feed is more specifically aligned with the current clip.

In some ways, you can consider the two surfaces as ‘top of funnel’, or viewers of a more general, yet related interest, with the Home recommendations, then ‘middle of funnel’ with ‘Suggested’, as these viewers have already shown specific interest in your content, by tapping through, and now the recommendations are more closely aligned to that.

Alves says that the most effective tactic she’s seen creators used to maximize their appearances in people’s ‘Suggested’ listings is to develop a video series, or create topically related videos that lead on from one another.

“You can imagine when a viewer is looking at everything that they could choose to watch next, there are a lot of options there, and if you have really strong, identifiable branding, that’s consistent, it’s really easy to pick out which videos are from your channel, and it just makes that decision all the quicker for viewers.”

Alves also notes that CTA buttons to ‘Watch more’, as well as playlists and end screens are also effective tools in encouraging viewers to keep watching your content.

Alves’ key lesson through this overview is that YouTube’s algorithm is designed to “find videos for viewers, not viewers for videos”.

So if you come to the Home page, YouTube will try to show you the content you’ll stick around to watch, based on personalized recommendations (i.e. past history, location, trending, etc.), while if you click through to a specific video, the ‘Suggested’ content will largely be defined by that specific clip. YouTube’s system is not designed to amplify specific clips or creators, as such, but instead, its entire aim is to align with the interests of the individual.

Which seems like a logical process, but it’s also an important point of clarity in this context.

In essence, what you want to be doing is creating content that appeals to your target audience, then building consistently around themes and topics to keep your viewers coming back, while also maintaining branding elements to strengthen those connections. Part of that will come through research, and understanding what works in your niche, but mapping out a strategic approach, and sticking to that process, is also key to building a YouTube audience over time.

There are some valuable pointers here, which could help in your platform planning – and given YouTube serves over 2 billion monthly active users, and is seeing significant growth in viewing on TV sets, it should be at least a consideration in every marketing plan.

How to Get Hired After B