The US Government has launched a new push to boost COVID-19 vaccine take-up among younger people, with a series of Snapchat Lenses, featuring President Joe Biden and Vice President Kamala Harris, among others, which share information about the vaccine, and how people can get the jab.

As reported by CNN:

The CDC has reported that while the US vaccine push is yielding good results, take-up rates among people aged 24 and younger are still low, and it needs to boost this segment in order to meet the White House goals for vaccine adoption.

The fact that the Government has chosen Snapchat for this purpose underlines the app’s rising influence, with the company reporting that it now reaches around 90% of 13-24 year-olds across the US, more than Facebook, Instagram and Messenger combined within this demographic cohort.

Of course, the Government is also working to raise awareness on TikTok and Instagram as well, but in creating dedicated Snap Lenses, it highlights the significance of Snap’s presence in this respect, and the power of its AR tools for communicating information – for utility, beyond simply adding digital dog ears to your selfies.

Snapchat has been working to raise awareness of such in its most recent research reports, with Snap commissioned data showing that:

“AR adoption is tracking with the mobile usage boom we saw in the mid 2000s: By 2025, nearly 75% of the global population and almost all smartphone users will be frequent AR users.” 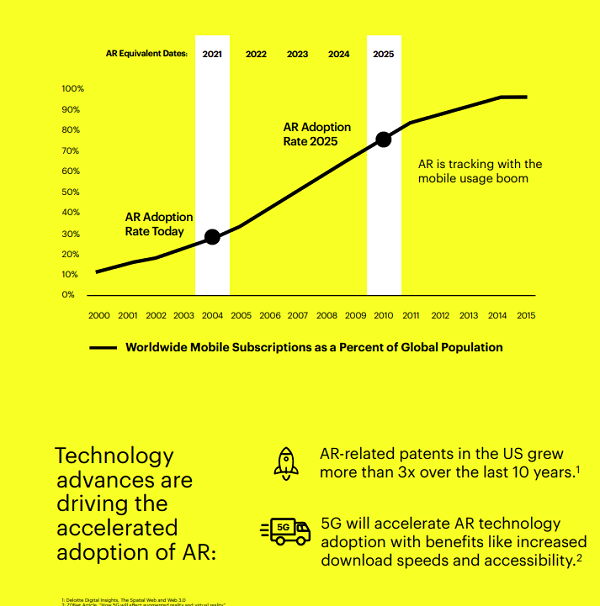 The focus of that research is to highlight the potential of AR for eCommerce, but as displayed with this initiative, it also has potential for information sharing, and producing messages that are more likely to engage younger audiences.

And going on these trends, that’s only likely to increase, with people becoming increasingly accustomed to seeing AR applications and tools, and eventually, growing to expect that they’ll be able to get more from AR applications that they can directly interact with.

It’s an interesting experiment in this respect, and hopefully Snap will also provide data on user engagement with these Lenses, and ideally, how that then relates to subsequent vaccine take-up as a result.

The new Lenses will be live for Snapchat users in the US from this week.